Not Too Hot – Not Too Cold Unemployment Report Plus ISM Services Fuels Rally!

The market has broken out to new highs for the year. Last week, strong economic releases from Asia sparked buying early in the week. Korean exports rose sharply and China’s PMI came in much better than expected.

The ADP employment index measures job growth in the private sector. It was released Wednesday and it came in below estimates. Analysts had expected 25,000 new jobs in the private sector and 23,000 jobs were lost. This was a big miss, but the market was able to shrug off the number. Friday, the Unemployment Report was released. The market was closed but the S&P 500 futures traded higher on a weaker than expected number. Most analysts had expected 190,000 new jobs and 165,000 were created. This almost seemed like a “not too hot, not too cold” release. It indicates that jobs are being created, but not so rapidly that interest rates will have to be raised immediately.

This morning, ISM services came in much better than expected. The service sector accounts for 80% of our jobs and this is a very important number. Analysts had expected 54 and it came in at 55.4, the strongest number since May 2006. Last week’s ISM manufacturing number also came in better than expected and both are handily above 50, indicating economic expansion.

The economic news this week is rather light and the market will digest the big releases from the last few days. Although the market likes the employment figures, I still feel job growth will stall in the next few months. The government’s stimulus programs have run their course and census workers will temporarily make the job scene appear better than it is. Private sector job growth is essential and corporations are reluctant to hire. They do not want to add overhead. Productivity has risen sharply and companies would rather hire temporary help. They are still not convinced that the recession has ended.

The employment news from Europe was also weak. Germany’s unemployment rate rose from 7.3% to 7.5%. They are the largest and strongest economy in the EU. Overall unemployment in Europe rose to 10%, the highest level since 1998. In the next three months, Portugal, Ireland, Italy, Greece and Spain (PIIGS) will auction over €400 billion worth of bonds. This huge refinancing is likely to push interest rates higher. Weak auctions could spark a swift decline as investors are reminded that enormous deficits exist.

Every time our nation has been faced with a recession, we mortgage our future and spend our way out of it. Over time, each recession has required a larger commitment. One year ago, the Fed and the U.S. Treasury threw everything they had at the problem. If their plan failed, we would have had a financial collapse. All of our bullets have been fired over the last three decades and the next economic decline will result in a depression. In a little more than a year, our national debt will rise to $15 trillion. If our future obligations are added into that total, our debt stands somewhere around $75 trillion. Right now, the market does not believe this threat exists and it is focusing on all of the “positives”.

In October and January, the market rallied ahead of earnings season. Once the announcements began, stocks pulled back because good news was already “priced in”. I expect that same pattern to repeat itself and the market should continue to inch higher.

Great earnings, solid balance sheets and low interest rates are the focal point. Decent economic news in the US and Asia will support this rally. The momentum is strong and no one wants to stand in front of this freight train. The volume has been fairly light and Asset Managers are not chasing stocks.

One of the fundamental puzzle pieces seems to be falling into place. Oil is the fabric to every economy and I have not seen an uptick in demand until recently. How can there be a global economic recovery without the demand for oil rising? This inconsistency led me to believe that we were close to a top a month ago. I am watching oil very closely because it will help me gauge the remaining upside potential for this rally.

I honestly don’t mind sitting on the sidelines right now. The momentum is strong and I know that bullish speculators are loading up on calls, just like they did in January. When the market reverses, it will happen quickly and they will be flushed out. The higher we go, the more severe the pullback.

Signs of a sovereign credit crisis will take many months to unfold because the IMF and other countries will rush to the rescue. Eventually we will reach a breaking point and the magnitude of the problem will present itself. Then prices will fall quickly. A double dip recession would also unfold over many months. The market will discount flat economic numbers for a long time before it reaches a breaking point. I know it is coming; it is just going to take time.

I am very passively playing the upside and I don’t care if I miss this rally entirely. The higher it runs, the happier I am. That will just make the shorting opportunities better.

With all of these bearish comments, I thought I should mention that in my 20+ years of trading, I have traditionally been a bull. I have been concerned about the future, but the problems were too distant to worry about. It was also inconceivable that the US could suffer a financial collapse. Now the problems are at our doorstep. 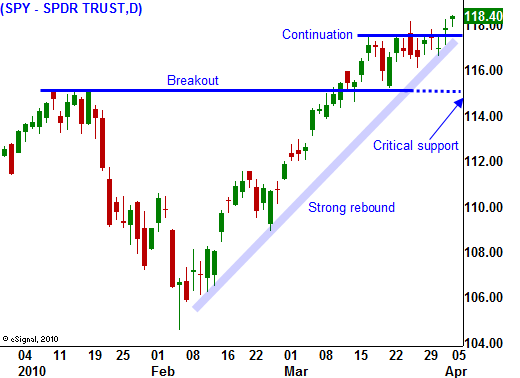