This morning, a solid round of earnings has the market trading higher again. Tech stocks are leading the way and businesses are spending money on IT. Microsoft and Western Digital posted very strong numbers. On the industrial side, Honeywell and Johnson Controls also beat estimates.

One third of the S&P 500 companies have posted results. Over 70% of companies have beaten revenue estimates and 80% have beaten earnings estimates. Stocks were priced for great results and they are even exceeding lofty expectations. They are not declining as they did in October/January and so far, the earnings have been so good that profit takers have been kept “at bay”.

Even weak news from Europe could not spark a selloff this morning. Greece is going to tap into aid from the EU/IMF. Conditions are deteriorating quickly and they will receive $60 billion in aid. Yesterday, Greece reported that its deficit is much bigger than initially projected. Ireland also reported that its budget deficit was greatly underestimated. Overnight, England reported that Q1 GDP grew .2% when analysts were expecting .4%. Without question, Europe is the weak link. Conditions will deteriorate in coming months and that will weigh on global markets.

With all of the “to do” regarding Greece, imagine the chaos when Portugal, Spain, Italy or Ireland ask for aid. Retirement benefits, pensions and healthcare are crippling these countries and the US is heading down the same road.

The economic releases next week are fairly light and they include consumer confidence, initial claims, GDP, Chicago PMI and consumer sentiment. They should not have much of an impact on the market. The FOMC will also meet and I am not expecting any changes in rhetoric or interest-rate policy. Earnings will again be the focus.

Now that some of the biggest and strongest companies have released earnings, we will see if the next round produces similar results. Traders want to sell stocks after the release, but the earnings have been so strong that buyers are stepping up. Strong revenues and tight cost controls are producing huge profits. Corporations are “salting” the money away and balance sheets are flush with cash. Interest rates are low and stocks are attractive investment alternative. We are in the sweet spot, but that can change quickly.

If a credit crisis unfolds in Europe, valuations can be thrown out the window. Once the banking system locks up, investors will sell their holdings in an effort to raise cash. Corporations can’t transact business because credit spreads widen. We lived through this last year and the next crisis will last much longer because nations (not just banks) will fail. This scenario could take many months to worsen and the threat will be discounted as long as possible.

I believe unemployment will start to creep higher in coming months, tax hikes will surface and interest rates will push higher. The market can deal with all of these events, but it can’t shoulder the fear that comes with a credit crisis.

If earnings continue to come in strong, the market will push to new highs. That rally will continue into May. During the summer, we are likely to fall into a trading range. Earnings comparatives will become more difficult with each passing quarter because we started coming out of the recession last year. Inventory replenishment has also fueled the rebound and that impetus will disappear. The headwinds I referenced earlier will keep a lid on the market.

I am finding some nice bullish trades on stocks that have released fantastic earnings. The shares pullback briefly on the news and there is a brief opportunity to jump in. By midday, the shares start moving higher. This is not a bad way to generate income. I am taking profits the same day and in a few cases I have held positions overnight.

I am very cautiously playing the rally and I am keeping my risk low. I don’t expect it to happen soon, but know that a breakdown below major support at SPY 115 would warrant put purchases. We are a long way from that level and as the market rises, we will raise our bearish trigger. 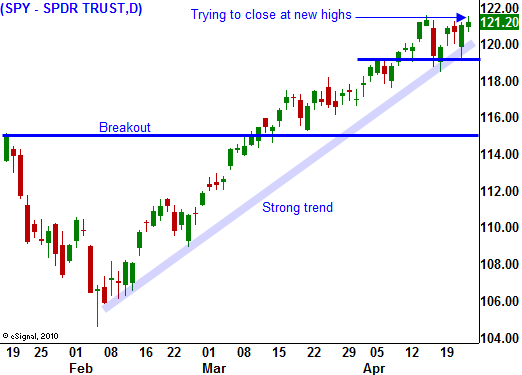