The market is looking for its next catalyst. Prices drifted higher into the close yesterday and there weren’t any “flies in the ointment” to stand in its way.

This morning, economic news from China is weighing on the market. Exports were relatively brisk, but imports fell to 22.7% from 34.1% in June. This reflects a slowdown in business investment and it demonstrates the importance placed on China’s economic growth. If they falter, global markets will fall.

In the last day, traders also seem to be abandoning the notion of quantitative easing this afternoon when the FOMC releases its statement. Conditions are not dire enough to warrant a step backwards. The release is likely to contain comments about tough economic conditions. However, the Fed will soften the blow by reiterating its “dovish” stance.

The backdrop morning is weak and we could see an afternoon decline. When the FOMC released its statement a month ago, the market sold off.

A small business survey conducted by the NFIB (National Federation of Independent Business) showed that optimism fell .9 points to 88.1 in July. Small businesses account for 50% of our nation’s employment and the private sector will be slow to rehire.

Wholesale inventories rose .1% in June. Sales fell .7% marking the second straight drop. This was the largest decline in 15 months. Much of our economic recovery can be attributed to an inventory rebuild. We will not have this tail-wind moving forward.

The earnings scene is winding down and that strength will also start to fade. Later this week, retail sales will be released. Consumers have been very cautious and they are “trading down” to cheaper products. Procter & Gamble and Colgate said that consumers are extremely cost-conscious. Over the next two weeks, retailers will start releasing earnings and I believe the impact will be more negative than positive.

The market has backed off from resistance and is currently testing the 200-day moving average. Traders are taking time off and volumes will decline. This means choppy, directionless action is likely the next two weeks. I’m not going to read too much into today’s decline. A breakdown below SPY 109 would be of greater significance than a close below the 200-day moving average because it would represent a “lower low”.

The momentum today favors the downside. Once the market establishes a direction, it tends to continue into the close. The Fed’s statements are likely to shake bullish speculators out of the market. We were on the brink of a breakout and I’m fairly certain that the bullish sentiment has grown during this recent rebound. August has a tendency to lure people in and then pull the rug out from under them as we head into a seasonally weak period.

Initial jobless claims were horrible last Thursday and that number could push the market lower in two days. Friday’s retail sales number could also add to the selling pressure.

Be patient and don’t jump the gun. This fickle market could go either way on light volume. If we close below SPY 109, start buying some out of the money October puts. The VIX has dropped and options are reasonably priced. Towards the end of the month, the selling pressure will mount. 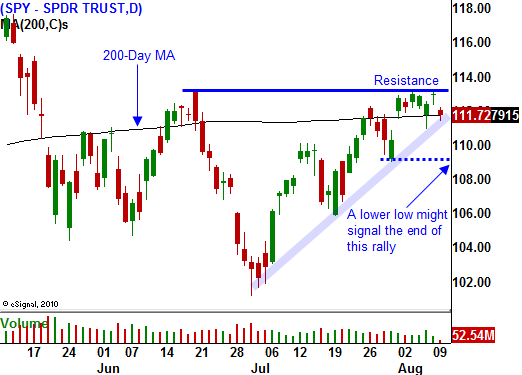