Yesterday, the market was able to shrug off an interest rate hike in China. They made the announcement during the Chinese New Year so that traders had time to evaluate the news. Asian markets declined when they reopened and that selling pressure has spilled over to our market.

This is the second time in the last month that rates have been increased by .25%. The Chinese government has progressively raised bank reserve requirements and stronger tightening measures needed to be taken. A week ago, their PMI was 52.9 and that was stronger than expected. Inflation has become a major concern and they are committed to slowing the economy down.

Rising interest rates are not a problem if they are accompanied by economic expansion. China’s GDP will grow by 10% this year. As interest rates climb, the Yuan will strengthen against the dollar. Our Fed wants a weak dollar and now they shall have it.

A falling dollar will manifest into US inflation. We have a huge trade imbalance and imported goods will cost more. Pick up any household item and if it says “made in China”, it will cost more in the future. It is hard to find something that is not made in China. American consumers have benefited from a cheap Yuan and that era has ended.

The market decline this morning will be contained. Traders have been expecting this move and it will not have a lasting impact. The upward momentum is strong and Asset Managers are buying every dip.

Only the threat of a credit crisis will topple this market. With the EU’s new credit facility, I don’t see that fear coming back into the market in the next few months. This morning, Moody’s warned that a lack of fiscal reform could have a negative impact on Japan’s credit rating. All eyes have been on Europe, but Japan could be the real powder keg.

I am selling out of the money put credit spreads. In particular, I am looking for strong stocks that have pulled back after releasing good earnings. These stocks were priced for perfection and speculators were flushed out after the news. I would like to buy in the money call options, but I will only do that on a market pullback or after an extended period of consolidation. I do not want to chase stocks at their current levels.

The market will continue to grind higher. The economic news this week is light and there is nothing to stand in the way. I like retail, heavy equipment, commodities and some tech. As long as the market does not get ahead of itself, we should not see any major declines. 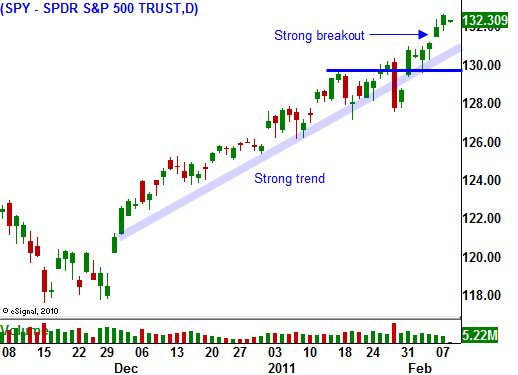