No News Is Good News. Stocks Poised to Push Higher This Week

Trading this morning is lackluster and the market opened unchanged. Overseas, Asia was strong and Europe was flat. The news is light and momentum should carry the market higher.

China’s trade surplus fell more than expected and that is positive. They have been trying to stimulate domestic consumption and imports increased dramatically. In 2010, China surpassed Japan as the world’s second-largest economy. Inflation in India increased at a lower rate than was expected and that is helping their market. Higher prices will bite into consumption and it is a real threat to their economy.

Later this week, the PPI and CPI will be released. These numbers have been benign, but that might be changing. Wholesale prices have been creeping higher and producers have not been able to pass those costs on to consumers. That means profit margins will be down. If inflation starts to creep into the CPI it will impact discretionary spending. Food and energy prices have been moving higher, but the market has dismissed this rise. Traders have been more focused on core inflation because these two components tend to fluctuate wildly.

Unrest in the Middle East is spreading, but not at an alarming rate. Demonstrations have been relatively peaceful. Conditions in Egypt are stabilizing, but the outcome will not be unknown for many months. The military is in control and a new government will be established as soon as possible.

Earnings season is winding down and retailers will dominate the scene this week. Same-store sales figures were released two weeks ago and they were encouraging. Consumer spending rose .7% in January and that was also better-than-expected. Consumer discretionary stocks have been “soft” and I believe they have some upside. Retail sales will be released tomorrow and analysts are expecting .5% increase.

European credit concerns have been pacified. Italy held a €5 billion bond auction with excellent success. Yields rose slightly, but the bid to cover was strong. As long as fear of a crisis is low, the market will grind higher.

Stocks are cheap, the Fed is friendly, Obama has turned “pro-business” and economic conditions are improving. The momentum is strong and Asset Managers will rotate money out of bonds and into equities.

I am selling out of the money put credit spreads on strong stocks that have pulled back on good earnings. I am making sure that support lies above the short strike and this provides added protection. The market is overdue for a pullback and I will be a call buyer on any dip once support is established.

Look for the market to grind higher this week. 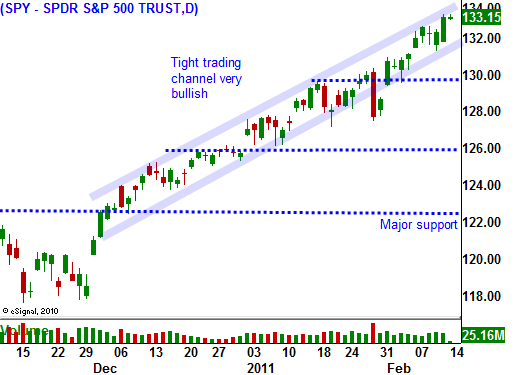