Trading Will Be Quiet This Week. The Vote In Greece Will Be The Driver

This is going to be a relatively quiet week for the market. The Fourth of July holiday is approaching and there is only one major news event.

All eyes will be fixed on the votes in Greece. Wednesday, they will vote on the austerity/privatization structure. Most analysts believe this will easily pass. On Thursday, they will actually vote on the measures and this could be dicey. The Prime Minister believes he has the votes he needs, but the margin is paper thin (two votes). If this passes, the market will be able to grind higher into the weekend. If not, look out below.

French banks have agreed to voluntarily roll Greek bonds out. When current bonds mature, they will reinvest the money in 30-year bonds. German banks are not as willing. They want the new issues to be guaranteed by the German government. This has been a sticky issue in the last two weeks and it needs to be resolved. Greece has to go through restructuring and if the money is reallocated the market will rally. The magnitude of the problem is relatively small and this “can” will get kicked down the road. I do not believe a major credit crisis will unfold this year.

Last week, Moody’s downgraded Italian banks. Their bond yields jumped to the highest level this year and this could be problematic in the future. For now, nerves are calm and Italian interest rates have stabilized. China is in the midst of a European tour and they are supporting bond auctions (Hungary is the latest beneficiary). They know the line in the sand as to be drawn with Spain/Italy. These two nations are too big to fail and too big to bail. As long as these bond yields are stable, the credit crisis will not escalate.

China will release its PMI this Friday. It is a major news release; however, we got the flash reading last week. We know it will be weaker than expected and bad news is already priced in. Last week, Premier Wen declared that China has won its battle with inflation. For the time being, they might stop tightening and that would be good for the market. Given the progressive steps taken this year, I don’t believe they are done. At best, this is only a pause.

President Obama is getting involved in the debt ceiling discussions. Last week, two Senators left the negotiations and both sides are distant. With each passing week, the deadline draws nearer. If this is not resolved by mid-July, we can expect a nasty market decline. Politicians will wake up and Republicans will agree to a temporary solution. If Washington makes any progress on the debt ceiling, the market will rally.

The economic news this week is fairly light. PMI and ISM manufacturing will be released towards the end of the week. The Unemployment Report is not scheduled until July 8th. When we come back from the holiday next week, employment will be the focal point. Earnings season will also be right around the corner and that should lend support to the market.

Oracle and FedEx posted strong numbers last week. Both companies also gave robust guidance for next quarter. Earnings could provide the positive news we need for a market bounce. I am not looking for a huge move, just a rebound to SPY 132. Once that move runs its course, we will prepare for another round of selling.

I believe cautious guidance, a slowdown in China and the looming debt ceiling will weigh on the market in August. The market will chop back and forth until these issues are resolved. That means we need to keep our size small and focus on selling strategies.

I like selling out of the money put credit spreads on strong stocks with defined support levels. In particular, I am looking for stocks that were able to tread water during the recent market decline. That type of price action tells me that Asset Managers are accumulating shares during market pullbacks.

The market typically rallies into major holidays on light volume.

If by chance Greece does not pass its vote, be prepared to buy in put credit spreads. As long as the SPY closes above 125, I am comfortable with these positions. 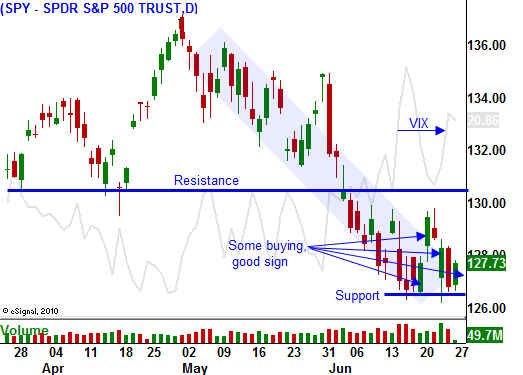