I only take a couple vacation days each year and it figures that the Dow would tank 600 points while I’m away. After the debt ceiling was raised I felt that prices would slip, but the damage would be relatively contained. I did not expect fear to build so quickly.

Over the weekend, Standard & Poor’s lowered our credit rating from AAA to AA+. Global markets reacted and we are in melt down mode.

There were two primary reasons for the downgrade. First of all, Standard & Poor’s lost confidence in our leadership. Democrats and Republicans are more interested in finger-pointing and they are in finding a solution. The entire debt ceiling process was painful to watch and the end result was a “watered-down solution” that did not address tax reform or structural issues. Secondly, S&P was worried about our economic activity. The $800 billion fiscal stimulus program and quantitative easing failed to spark a recovery. Now those “drivers” are gone and the probability of a double dip recession is rising.

A warning shot has been fired and politicians had better take notice. The new Congressional committee in charge of budget cuts needs to increase revenues and address entitlement. If their plan does not trim $4 trillion from the deficit in the next 10 years, Moody’s and Fitch will downgrade our debt in coming months.

The FOMC meets this week and they will remain accommodative. The market will be expecting some type of action to restore confidence, but the Fed will come up short. Their previous efforts have been ineffective and any proposed action will only spark a temporary bounce.

The ECB said that it will resume bond auctions to build up its reserves. This should’ve been done two months ago when interest rates in Italy and Spain started to skyrocket. Last week, the ECB released a statement after its meeting and it did not address these issues – idiots. Investors lost confidence and global markets tanked.

We are on a very tough road from here on in. Austerity and entitlement reform will force economic contraction. This will impact profits and the market will decline. Alternatively, if material action is not taken to balance the budget, our debt rating will be lowered and stocks will decline. Either way, there is pain.

I believe the current decline is overdone. I don’t suggest trying to catch a falling knife. We will let it hit the floor and then pick it up. I will be watching for heavy selling and an intraday reversal. That will be a sign to sell out of the money puts naked on strong stocks. Option premiums are rich and this strategy will give us plenty of breathing room.

Last week, initial claims, ISM services, ADP employment and the Unemployment Report all came in decent. Economic conditions are not falling off a cliff.

Governments will take action and before we have a full-blown crisis, central banks around the world will throw in the kitchen sink. These actions will temporarily restore confidence and the market will find support. Along the way, we will have a series of lower highs and each intervention will be less effective. This process could take another year or two.

Interest rates are at historic lows and the governments that stand behind that debt are in question. There’s little money to be made in sovereign debt and stocks are attractive. I will roll up my sleeves as I did in 2009 and I will focus on balance sheets. Corporations that have lots of cash and a strong business model will rebound.

I like fertilizer producers, internet security, cloud computing, mobile devices and luxury retail. There are a number of companies that service lucrative niches and that is where I will focus my attention. You should be looking for these opportunities so that you can sell out of the money puts when we get an intraday reversal. Alternatively, you can sell out of the money put credit spreads, but I suggest keeping the strike prices wide so that you don’t have to buy “rich” puts.

We’ve had enough pain in the last week; let’s see if we get a reversal today. 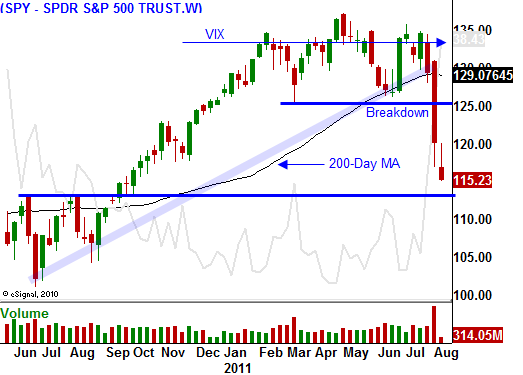