The Market Will Challenge the High This Week. Only Speed Bump – Flash PMIs On Thurs

In January, the market drifted lower and the news was rather “heavy”. Asset Managers pulled their bids and the SPY fell below its 100-day moving average. Major support at SPY $173.60 held and it was tested a second time. That resulted in a capitulation low and we have not looked back.

We’ve seen this pattern four times in the last year and each has resulted in a new relative high. I am expecting a breakout this week and the SPY is only $1 away.

Last Thursday, we got a weak round of news. The S&P was down 13 points before the open and those losses were quickly erased. This reversal was a sign of strength.

Horrible weather conditions have impacted economic data and retail sales. Traders are willing to look past the news on the notion that this soft patch is temporary.

Janet Yellen testified before Congress last week. She said that the Fed will pause tapering if activity deteriorates. Now we know that there is some wiggle room and the market loved this news.

Politicians extended the debt ceiling by one year. They did not wait until the 12th hour and this removes uncertainty.

President Obama plans to push back his healthcare program for small businesses. This delay is bullish and it will increase hiring.

Earnings have been good. Profits are up 7.5% year-over-year and cash flows are at record levels. Companies continue to buy back shares at a record pace.

The only speed bump this week comes on Thursday. Flash PMI’s will be released. Traders seem concerned about conditions in China, but that fear has been around for years. Their economy is stable.

Surprisingly, the recovery in Europe has been swept under the carpet. I feel it is more important than a .1% decline in China’s GDP.

Last week, the EU reported better-than-expected growth. Europe’s GDP was up across the board.

I took big profits last week and I’ve had few days to evaluate the price action – I am ready to dip my toe back in the water. I will buy calls on stocks that are breaking out. If the SPY closes above $185, I will add to positions. I won’t get aggressive until I see the flash PMI’s on Thursday.

If China is stable and Europe continues to improve (likely), the market will push higher.

Good news and momentum could push us to SPY $190. Look for stocks that are in a strong uptrend and are breaking out. Buy calls and use that breakout as your stop.

The price action today should be bullish and I am expecting a grind higher today and tomorrow.
.
. 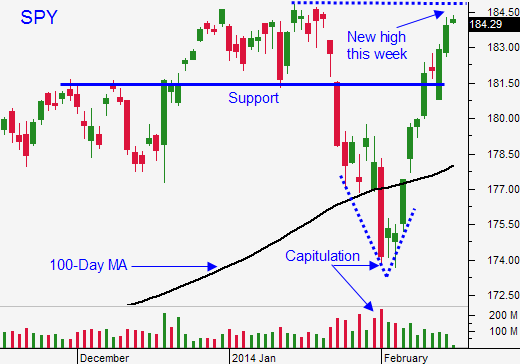