Relief Rally Will Run Out of Gas. News This Week Favors Bears – Use SPY $185 As A Guide

Posted 11:00 AM ET – The SPY was within one point of a new all-time high last Tuesday. Stocks quickly reversed on weak economic news from China and the market closed below horizontal support at SPY $185 on Friday.

Crimea held a vote yesterday and more than 90% of the people want to be annexed to Russia. More than 25,000 Russian troops were there to answer any last minute polling questions. This outcome was largely expected and we are getting a relief rally this morning.

.Putin will reveal Russia’s intentions on Wednesday. The EU and the US will impose economic sanctions. In short, the market does not care.

This crisis is just beginning. Putin might temper his actions temporarily. He will infiltrate the Ukraine with Russian citizens and they will invoke protests. Troops will advance into Western Ukraine to “protect” Russians. Putin knows that he has to control Kiev if he is going to control the country. The Ukraine’s is largest country in Europe and it is the “crown jewel”. President Obama has stated that the Cold War is over and he won’t do much to keep this cancer from spreading.

Uncertainty in the Ukraine did not help the market last week, but it was not the source of selling. China posted weaker than expected retail sales and industrial production. Their economy continues to slip and that is putting pressure on their shadow banking system. We’ve seen a corporate bond default and an investment trust default in the last few weeks. Many analysts believe the credit risks will escalate.

Domestic economic releases have been decent. This morning, Empire Manufacturing and Industrial Production came in slightly better-than-expected. Soft economic releases have been given a free pass due to bad weather. Temperatures are rising and traders will be expecting improvement during upcoming releases. I believe there is underlying strength in the US and pent-up demand will be unleashed.

The FOMC meets this week. Janet Yellen will change the framework for the statement and it will be scrutinized. Tapering will continue and the reaction favors the downside.

Asset Managers noted the selling pressure last week. Resistance at the all-time high is building and they won’t chase stocks. The bid will be strong when the market pulls back to major support levels.

Given the events that need to play out this week, I suggest staying on the sidelines. This is a low probability trading environment.

My gut tells me that this relief rally is a head fake. The news over the weekend was not that good. Bullish speculators will get sucked into this rally and we are likely to see a drift lower.

Once today’s move runs out of steam, we could see afternoon selling. A reversal would be very bearish. If we see this price action I will day trade from the short side. 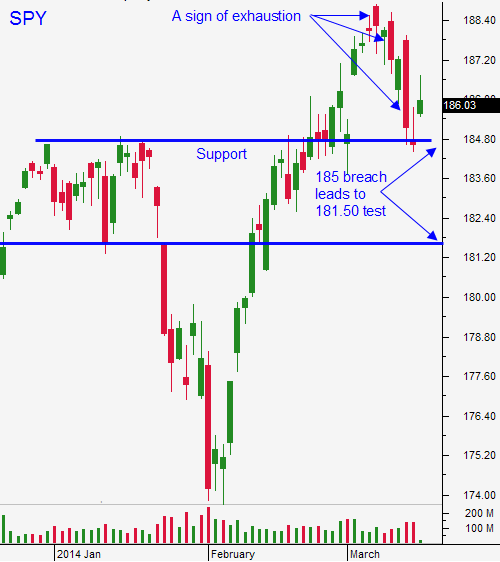