The stock market capitulated and now we have a support level on which to base our option trading. Conservative option traders should focus on put credit spreads. Aggressive option traders can sell naked puts. Speculators can sell puts and buy calls. If you use the same strike price it is called a syntetic long. The common theme is to sell premium on solid stocks.

Yesterday, the market finally put in a capitulation low. It started off week and tested the lows made on Tuesday’s open. After a few more attempts at a sell off, the bulls finally had enough confidence to step in and support stocks.

Midday, the government announced plans to help shore up the mortgage insurance group. The mere possibility raised hope for many financial institutions.

The reversal was swift and strong as predicted. The beaten down sectors like retail, home building and financials were the first to surge. Eventually, this bounce will exhaust itself in money or rotate out of these stocks into some of the prior leaders.

Overnight, strength and foreign markets and decent earnings supported prices this morning. We did not want to see a huge rally on the open. That could have been viewed as a selling opportunity via the bears and once the downward momentum was reestablished; the market could have been vulnerable to another sell off. Ideally, the market will do just as it has. It started off strong, tested the downside and bounced back.

I believe we will see a nice rally into the close. Initial jobless claims came in better than expected and this evening we will hear from Microsoft. Their earnings were very strong last quarter and the stock in staged a five year break out. Good news from one of the largest tech stocks in the world will bode well for that sector.

I believe the market will rally right into the weekend. The shorts will be eager to take profits and the bulls have a support level to lean on.

Next week, things get dicey. The FOMC will meet and I believe they will keep interest rates the same. Currently, the market has priced in a .5% rate cut. When it doesn’t get that, I believe it will sell off. The Fed acted in dramatic fashion and the magnitude of this week’s rate cut was not even seen during 9/11. They also need to maintain control and remove the appearance that they will do what is best for the market.

Next week we will also get a number of economic releases. The economy is weakening and I expect to see that in the data.

This capitulation bounce allowed you to get long very good prices. This will give you the staying power to ride out some of the whipsaws. As the market rallies it will eventually find resistance. Watch for decreasing volume on the rallies and a slowdown in momentum. I believe SPY 140 is the first resistance level and I think that the market should reach that with these. The next resistance level is SPY 145 and that might be a bit of a reach.

Problems still exist and they will take quite a while to resolve. Major technical support areas have been breached and I believe that another down leg will establish itself in a matter of weeks.

For today, get long stocks that are showing positive price movement. 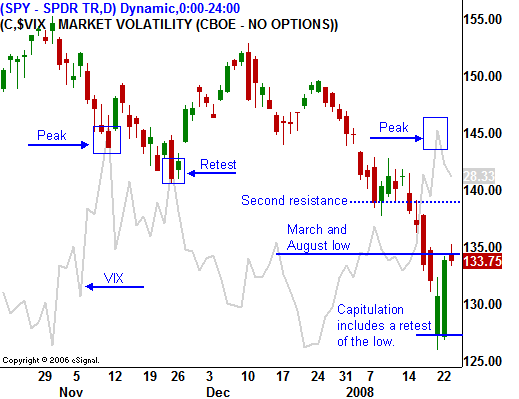