Option Trading – Dead Till The Fed!

Yesterday, the market rebounded nicely, erasing most of Friday’s losses. It was able to shrug off the declines seen in Europe and Asia.

Earnings have been coming in mixed. Revenues are strong, but profits have been hurt by a rise in materials costs. This morning, the volatile durable goods orders number came in much stronger than expected. The strength showed up across all areas.

Today’s rally has stalled and trading has fallen into a tight range ahead of the FOMC meeting. I do not believe that we will see a big move in either direction before the Fed makes its statement. If anything, the greater chance is for an afternoon decline as investors lighten up.

Regardless of what the Fed does, I believe the market will have a negative reaction. It seems as though Ben Bernanke has become a convenient scapegoat for all that ails us. As you can see in the chart, the VIX has peaked and I expect a retest. That would transpire if we get a decline after the Fed’s announcement.

There are traders who believe no action should be taken (me included). After 9/11, the Fed did not lower rates by .75% in a single move. Now, traders are expecting them to make a 1.25% percent move in a week’s time. Rate cuts, like the proposed fiscal stimulus, won’t have a material impact for 6 to 12 months. By then, the current credit crisis will have “played out”. Loose monetary policy is what got us into this mess in the first place. I would like to see the Fed have some “cojones” and not give the market what it wants. I would also like to see them put a plan together for FNM, FRE and the mortgage insurers. That unknown is what is causing the uncertainty in the marketplace.

There are traders who believe that a .25% rate cut is in line. The decent durable goods number and the Fed’s dramatic cut last week should give them latitude to take a pass tomorrow. “Dovish statements” will give the market something to look forward to. I believe this scenario will yield a better reaction then a .5% rate cut and a “don’t ask for anything else” statement.

Finally, there are traders who believe a .5% rate cut is critical to keeping us out of a recession. This is the scenario that is priced into the market. Many of these same traders called for a big rate cut two weeks ago and they had the gall to say the Fed panicked when they lowered by .75%. If they get their .5% fix, they will immediately look for their next high. This group can not be satisfied.

There are many cross-currents and a volatile reaction lies ahead. Thursday, I am expecting a weak GDP number. Last quarter, growth was helped by a buildup of inventories. I believe that some of those inventories will be worked off and that will weigh on a number. This could force the market to test last week’s lows. Everyone’s nerves could be soothed on Friday by a tame Unemployment Report. The jobless claims have been coming in better than expected for the last three weeks.

I am in cash and I am lining up my bullish plays. The market is oversold and I am not seeing that many good shorting opportunities. The sectors that have been weak, have found support. I would much rather trade from the long side at this juncture. 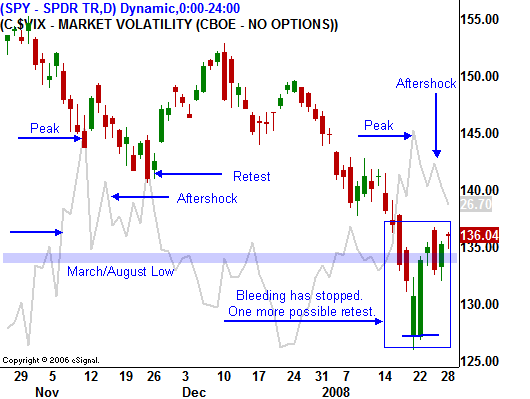