Option Traders Will Take Their Lead From The Wedge.

Yesterday, the stock option opened higher after a three-day weekend. News that the UK had nationalized a troubled bank provided support for all financial stocks. Hopefully this action was noticed by our government. Mortgage and bond insurers could use a helping hand and a similar move would remove a great deal of uncertainty from our market. Seemingly, the bulls had the upper hand and they would be able to add to last week’s gains.

By late afternoon, the rally had reversed and the down side was tested. News that Credit Suisse had uncovered miss priced assets to the tune of over $2.5 billion rattled the financial sector.

On a different front, China is faced with a dilemma. They have steadily increased interest rates but extreme winter conditions might have abruptly put the brakes on their economy. Out of 24 provinces, 17 are experiencing power outages. Their inflationary is over 7% and Asian markets were down 2-3% overnight.

This morning, the CPI came in at a hot 4.3%. Oil is over $100 per barrel and commodity stocks are rocketing higher. These events would normally have tanked the market. For now, prices have been firm and the bears seem to be squandering an opportunity.

This afternoon, the FOMC minutes will be released and we will be able to identify the driving forces behind the Fed’s decision to cut rates by 1.25%. They are more concerned about credit issues than inflation at this juncture.

These cross currents have resulted in a stalemate. Prices are consolidating and you can see in the chart that a wedge is forming. That means that in relatively short order, a breakout or a breakdown is likely to occur. There is enough supporting evidence to push the market in either direction.

I still like agriculture, energy and mining. Tech is taking some heat and it will be a better play once the market starts a sustained rally. For now, I will stay long commodities stocks if the SPY is able to stay above 133. 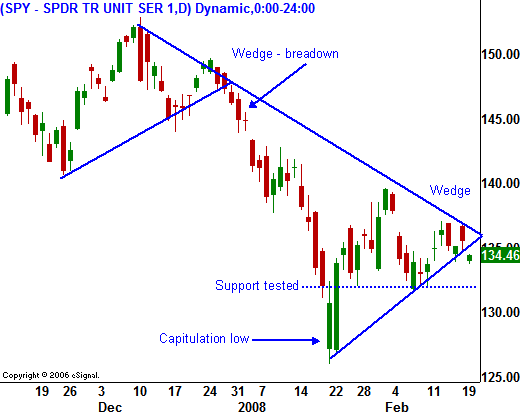