Horizontal Support At SPY 132 Is Being Tested – A Close Below It Is Bearish.

Yesterday, the market finished slightly higher and tech stocks provided support. Negative news has been dominating the market and fear is setting in.

Asian markets traded lower overnight and European markets were down 2% on average. The exception was China. It is down 55% from its peak and it was due for a bounce. Foreign markets have been rolling over and the strength is gone. This is troubling since global expansion was supposed to pull us out of this recession.

Central banks around the world are raising interest rates and inflation is a concern. Next week, the FOMC will decide if our rates need to move higher. Chairman Bernanke and other Fed officials have been making hawkish statements and a .25% hike has been factored in for August. Economic conditions are worsening and the Fed lowered its estimates for GDP and raised its forecast for unemployment a few weeks ago. As I mentioned yesterday, recent economic data has been coming in below expectations.

This morning, Moody’s lowered its rating on MBNA and Ambac. Financial stocks are heading lower and regional banks have come under extreme selling pressure. This week, FITB said it needs to raise $2 billion and it cut its dividend by more than 60%. Morgan Stanley also posted a weak number.

Other sectors have also lowered earnings estimates. Healthcare was hit hard yesterday when Coventry substantially lowered guidance. Pharmaceutical stocks are not the safe haven they were once considered to be and the entire sector is in a steep downtrend. Transportation stocks have also been hit hard. Rail companies have been affected by floods in the Midwest, airlines are grounding planes due to high fuel costs and FedEx lowered guidance for the entire year due to a soft economy.

A slowing economy and higher interest rates are a lethal combination. The upcoming earnings season could be very bleak. Producer prices have been increasing and companies are not passing those costs on to consumers (hence a “contained” CPI). This means that profits are likely to suffer. Retailers have been discounting as much as possible to generate sales and the bottom-line will be hurt. Once the rebate checks are spent, tough times lie ahead.

Today, the market is weak. Anything can happen on a quadruple witch, but I think the market will drift down to SPY 132. That is a key horizontal support level and a close below it would be bearish.

There are a number of economic releases due next week, however all eyes will be on the Fed’s decision on Wednesday. Short-term, the market is due for an oversold bounce. I would not the aggressively add short positions at this stage. Wait for a rally before establishing new short positions. The FOMC could spark that rally next week. 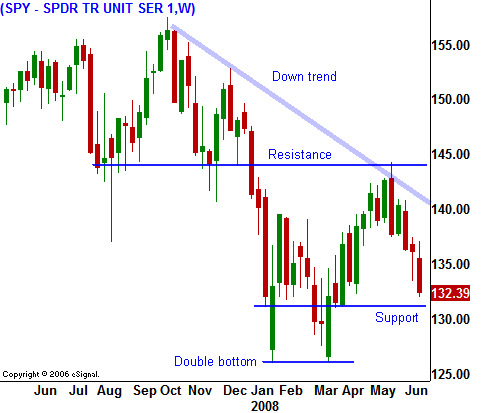