Ride the Rally – Be Out By the Close Friday.

In general, this has been a positive week for the market and we are near last Friday’s close. Monday, the market pulled back when it did not have any resolution to the financial crisis. Traders expected to hear of a Freddie Mac/Fannie Mae bail out and they thought a suitor for Lehman might have surfaced. When they did not get that news, they sold stocks heading into the Fannie Mae/Freddie Mac auctions.

As it turns out, those auctions fared much better than expected and investors still have an appetite for that debt. The market rallied on the news and it has been able to maintain a positive tone during light holiday trading. Durable goods orders came in higher than expected. Transportation and capital expenditures helped to boost the numbers. Today, the GDP came in better than expected and it was revised upward to 3.3% from the 1.9% preliminary number. Exports and the tax rebate helped to stimulate economic activity. This morning, jobless claims decreased by 10,000 and they stand at 425,000. Continuing claims rose to 3.42 million, the highest rate since 2003, and they are a concern.

Oil has started to move higher and the Russia/Georgia conflict could have long-lasting political ramifications. The United States has expressed their anger over the continued presence of Russian troops in Georgia. During last night’s Democratic National Convention, Joe Biden served warning to Russia. A new “cold war” would not be good for global economic expansion.

Hurricane Gustav is bearing down on Louisiana and fear is gripping residents on the three-year anniversary of Katrina. My prayers go out to those who have worked so hard to restore a place they love. This storm and the damage from Fay will impact an already battered insurance group.

In the chart, you can see that the market is caught in a tight range. It lacks direction and there is not a catalyst in sight. Prolonged trading ranges produce big breakouts and they favor the intermediate-term trend (bearish). This is a seasonally bearish period and we could be biding our time ahead of the next leg down.

As I mentioned yesterday, there was a chance for an end-of-month rally. That has materialized with help from a round of decent economic numbers. Do not be suckered in by this light volume rally. Trade it, but be quick to take profits.

The A/D is a positive 2:1 and this rally is likely to hold. The market has fallen into a tight range after the initial move this morning and I believe it will simply tread water at this level the remainder of the day. SPY 130 represents minor resistance and I don’t believe there is enough conviction for us to rally through that level today. If we break through this afternoon, buy strong stocks and hold them overnight. There is not any major news due out tomorrow and we could continue to grind higher. Keep your size small. 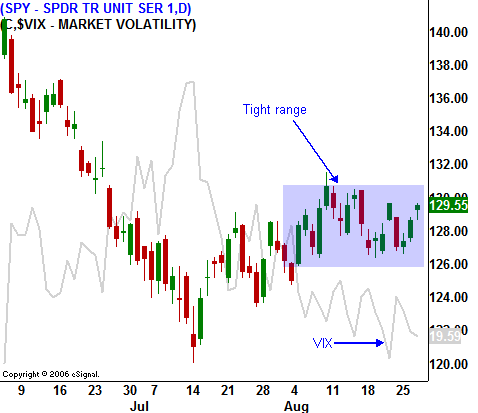