Year-end Rally Needs To Get Through SPY 92 – Stay Bearish Long-term!

Wednesday, the market staged a nice rally and it looks like Santa Claus has not abandoned us. In very quiet trading, the market is continuing its five-day rally. If the SPY can get through 92, the market is likely to run up to 100.

Without question, we are overdue for a short covering rally. The first few weeks of the year are traditionally bullish and there may be some euphoria ahead of Obama’s inauguration. Long-term, I remain bearish.

This morning, ISM manufacturing came in much weaker than expected. National factory activity fell to 32.4, the lowest level since 1980. Bad news is factored into the market and it continues to loom. Do not persuade yourself that this is anything more than an oversold bounce.

The Fed in an act of desperation threw everything they had at the credit crisis. Too much debt and not enough cash are the heart of the problem. Bailouts and stimulus packages will only add to our debt and temporarily postpone difficult times.

This morning, Goldman Sachs released some interesting predictions for 2009. They believe home prices will fall another 15%. In addition to the massive losses taken by financial institutions last year, they believe that banks will write down another $1.6 trillion this year. They also predicted that the government will issue $1.75 trillion in new debt this year and that represents 12% of GDP. That’s twice as high as the previous record of 6% in 1983. The budget deficit will increase from the current level of $2.3 trillion to $4.5 trillion. These are dire predictions and they put the magnitude of the problem into perspective.

Our long-term debt problems will not be fixed with more debt. In less than 10 years, our government will run out of money and they won’t be able to service the interest payment on our national debt and Social Security. That is not to mention all of the other necessary expenditures.

Because of my long-term bearish bias, I’m not compelled to get long. I still believe selling OTM puts is the best strategy. I can distance myself from the market and I can take advantage of the volatility crush. Next week the market could grind higher and it will stall ahead of the Unemployment Report. Once the number is released, traders will gasp in horror and then they will step in and buy as they did last month. Bad news has been factored in and the market shrugs it off. Shorts need to cover and we need to test the upside before another solid shorting opportunity presents itself. 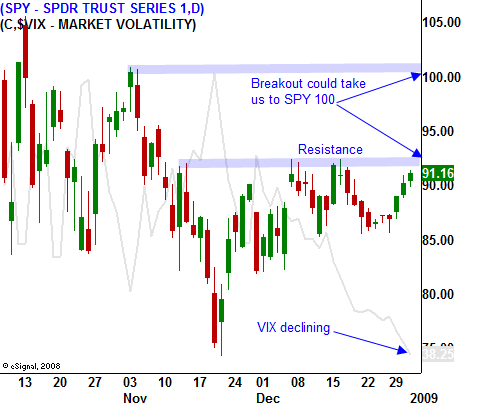