Watch For A Big Drop and a Swift Intraday Reversal – That Will Mark Temporary Support!

Yesterday, the market staged a nice one-day rally on news that China is increasing its stimulus program by almost $600 billion. For the third straight quarter their PMI (purchasing manager’s index) has risen and many speculate that their economy has found support. Commodity prices started moving higher and copper posted a three-month high. The news rallied stocks in Asia and that buying spread around the globe.

Much of yesterday’s buying was short covering. Not much has changed in the last 24 hours and the market gave back a good chunk of its gains near yesterday’s close. This morning, all of those gains have been stripped away and we are making new 12-year lows.

In the last week, the economic news has been disastrous. Durable goods orders, GDP, ISM manufacturing, the ADP employment index, and the Beige Book were all concerning. This morning, we learned that jobless claims eased slightly over the last week and they fell by 31,000 to a seasonally adjusted 639,000. Continuing claims are still above 5 million and Americans are struggling to find work.

The credit crisis is spreading and now one out of every eight households is either behind in their mortgage or they are in foreclosure. The president’s housing bill will be up for a vote today and from what I’ve read, it is very complicated.

Today, we will hear his plan on health care reform. The market is scared and it is not embracing his plans thus far. Businesses are fearful that his policies will have a negative effect on earnings.

He is mandating that all businesses large and small institute 401(k) programs for employees. This will be expensive to implement and administrate and has a small business I can tell you I will never hire anyone. I will use independent contractors to avoid this nightmare. Small businesses will also see their tax rates increase if they generate more than $250,000 in income. Capital gains taxes will go up at a time when businesses need to attract capital. Oil companies be slapped with windfall profit taxes and they will not spend money on oil exploration in this environment.

At a time when businesses should be encouraged to invest, the president’s policies are having the opposite effect. Money is being spent on social programs and they will not create jobs. Instead of giving handouts, the government needs to focus on putting people to work. Payroll tax credits and investment tax credits would prompt businesses that are waiting for signs of improvement to put money to work now.

In addition to the president’s policies, investors are still worried about our financial system. The credit crisis started with investment banks and spread to national banks. A few weeks ago, the carnage spread to regional banks and insurance companies. AIG has received almost $200 billion in government aid and the money is being thrown into a bottomless pit. Until we clean out the toxic assets, the market will drift lower.

The situation in Europe is serious. Eastern European banks are on the brink of failure and they can’t count on the EU for support. Germany, the largest number is having a crisis of its own and it can’t justify giving money to other countries when it is in dire shape itself. The entire EU structure could be in jeopardy. The ECB waited way too long before they started lowering interest rates. One bank failure could start a domino effect in Europe.

Tomorrow, we will get the Unemployment Report. Brace yourself; it’s going to be ugly. Initial jobless claims during the last four weeks have been horrendous. In the last two months, the market has been able to shoulder the news. Worst case scenarios are priced in and if there is any surprise, it would favor the upside. The market is deeply oversold and one good news item (like China) could go a long way.

Bears are very short and a 3 to 4 day rally would spark a significant short covering rally. You never know where the catalyst will come from, but these moves tend to happen when you least expect them. Bulls are patiently waiting and they are nibbling when the market suffers a big loss.

My gut tells me that prices are very compressed and that a meaningful bounce is close by. I am looking for a deep decline and a swift intraday reversal. I suspect that we will see one in the next few days. If that move can follow through the next two days, we will have formed a new temporary support level.

I believe the market will shoulder tomorrow’s Unemployment Report and we are close to temporary support. I am selling OTM naked puts on stocks I like and I am favoring the commodity sector. I currently have 50% of my desired risk exposure and I will add next week if the market can weather tomorrow’s storm. 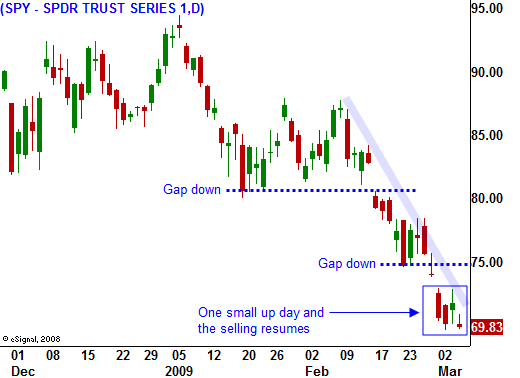