Bears Need A Late Day Sell-Off or We Will Drift Back Into the SPY 93-96 Range!

The last two weeks the market had been in a very tight trading range between SPY 93 and SPY 96. One way or the other, we were bound to break out this week. The market has run out of “drivers” and profit-taking has set in.

The price action has been negative this week and traders are getting nervous as interest rates continue to climb. Yesterday, the market closed below horizontal support at SPY 93. It is just above the 200-day moving average and the uptrend line from March. If we close below SPY 91, selling momentum will accelerate.

Last week, bulls dodged a bullet and long-term bond auctions went fairly well. In the last month, 30-year bond yields have spiked more than 1%. Higher mortgage rates are stifling home buying and they are making bad credit conditions even worse. The bulls will continually be dodging bullets every other week as the Treasury holds bond auctions to finance over $1 trillion. Next Tuesday, Wednesday and Thursday we will have 3-year, 5-year and 7-year note auctions. The threat of higher interest rates will keep a lid on this market.

This morning, the market had a positive reaction to the initial jobless claims number. While the initial claims were higher than expected, continuing claims dropped by 148,000 to 6.7 million. LEI (leading economic indicators) rose more than expected and the number was up 1.2%. The Philly Fed also showed nice improvement and it rose from -22.6 in April to -2.2 in May. This number measures manufacturing activity. These items don’t normally have a large impact on the market, but in a light-volume, direction less market they are producing a nice little rally.

Next week, the economic releases will be much more substantial and on Wednesday, we have an FOMC meeting. Durable goods orders, new home sales, initial claims, GDP and personal spending will be released. This will also be the end of the second quarter and we are bound to see “window dressing”.

I still view this as a bear market rally, but that doesn’t mean it can’t go higher. In fact, I would love to see it move much higher because that will set up better long-term shorting opportunities.

Consumption accounts for 70% of our GDP. Higher gasoline prices, higher taxes (federal, state, municipal), tight credit, falling home prices, rising interest rates and unemployment will all restrict discretionary spending. Taxes are a real burden. We know federal taxes are going to increase next year and the government has to raise money to pay for all of its initiatives. Illinois is running a $12 billion deficit and in my home state, income taxes could rise 50% next year. Even though my house is worth less, my property tax increased this year. The city I live in is also increasing municipal sales taxes. This situation is not unique to me; it plagues the nation and it impacts spending.

The growth in China is encouraging, but one country can’t pull the entire world out of recession. More than one third of its growth is dependent on exports and the rest of the world is not spending money. Many speculate that China’s commodity purchases signal massive growth ahead. I disagree. They are looking for alternative investments and they want to diversify away from the dollar. One way to do that is to stockpile commodities that they can use for future growth. These prices have run up dramatically and I believe China will stop buying at these levels. The bottom line is that the Fed is printing money and they want to reduce their dollar exposure.

Debt levels are extreme and only time and savings can resolve this condition. The government continues to spend money without any regard for how it will finance the debt. Personal debt levels are also out of control and this week Bank of America said that credit card default rates spiked to 12.5%. That is up from 10.5% a month ago. They stated last quarter that their credit card default rate could rise to 24% before this is all over.

Americans will shift from “shop till you drop” to “save to the grave”. A recent report I read calculates that the average baby boomer has less than $50k saved for retirement.

This market is not out of the woods yet and bad news could strike from anywhere. There is a high likelihood that an Eastern European country will have a financial collapse. That news could hit at any moment and it would send a shockwave through Europe. Be mindful that global conditions are fragile.

Today and tomorrow are critical for the bears. They have the bulls on the ropes and they need to deliver a knockout punch. If they can’t this week, the momentum could shift back over to the bulls and we are likely to drift back up to the SPY 93-96 trading range. 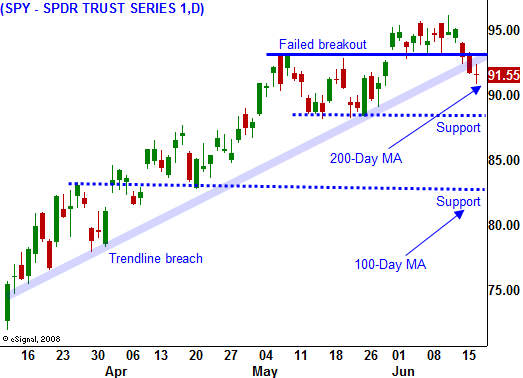