This week, the market staged two very strong rallies. The first came Monday when Goldman Sachs handily beat earnings estimates. It posted its largest revenues ever and the entire financial sector shot higher. Most analysts realize that Goldman is in a league of its own, but the results were so strong that optimism spilled over to other banking stocks.

Tuesday, Intel announced earnings after the close and they also blew estimates out of the water. Furthermore, their guidance was optimistic and they were seeing signs of a recovery. There are very few stocks that can influence the entire market, Intel is one of them. Tech stocks have been strong relative to the market and they are critical to any sustained rally.

Bears had been counting on a head and shoulders breakdown when the SPY breached 89 last week. That level also represents the 200-day moving average and shorts (me included) were starting to gain confidence. The bullish earnings news ignited buying and it fueled a short covering rally as the market surged through resistance. We are back within striking distance of the relative high at SPY 94.

Most companies are likely to beat earnings estimates and in the early going two thirds have done so. Analysts are expecting a 39% decline in earnings this quarter and the bar has been set very low. In Q1, analysts were expecting a 34% decline and 70% of the companies in the S&P 500 beat estimates. The key this quarter will be the market’s reaction to the number.

Goldman Sachs rallied slightly after posting huge numbers. This morning, J.P. Morgan Chase posted excellent results and the stock is trading lower. Decent results are priced in and I don’t believe this sector will lead a rally. Credit card defaults, mortgage defaults and commercial real estate will weigh on banks. Next week, we will get many releases from this sector and they won’t help or hinder the market.

Intel staged a big move on Wednesday, but it has not been able to add to those gains. Xilinx and Novellus (both semiconductor stocks) are flat after announcing earnings. Semiconductor stocks might also be tired. After the close today, Google and IBM will release earnings. Both stocks are trading near eight-month highs and we will see if there is any gas left in the tank.

Tomorrow, Bank of America, Citigroup and General Electric will announce earnings before the open. This will complete the first significant week of earnings and if the market is able to rally up to SPY 94, there is a chance that we will break out next week. Each day next week will be filled with major earnings announcements.

The economic news next week will be light and it will not influence trading. The Treasury will hold another round of auctions and interest rates will be important. Our government already has a $1 trillion budget deficit and we are only half way through the year. A continual supply of new bonds will hit the market every other week and higher interest rates will eventually provide a stiff head wind. So far, the auctions have gone well and they have not stood in the way of this rally. Sooner or later, that will change.

As for today, the market needs to take a breather after a big run. With major earnings announcements before tomorrow’s open, trading should be rather lackluster today. There is an upward bias, but major resistance is close at hand. If we get a big overnight rally, buy programs could kick in on option expiration and we could see a breakout. 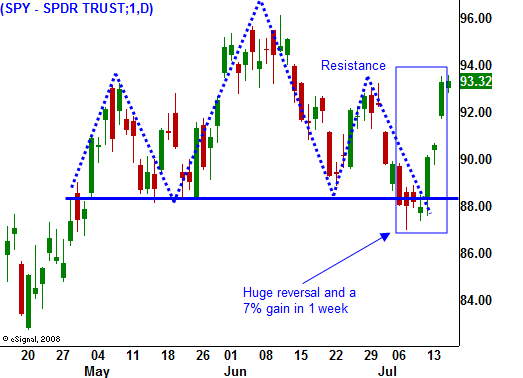