The Market Is Likely To Take A Breather Next Week – Sell Out Of The Money Puts!

This has been a great week for the market. It has broken out to new highs on heavy volume and strong breadth. “Less bad” economic releases and quadruple witching have fueled the rally.

Asset Managers that are under allocated are starting to panic. They have not seen the September pullback that they expected to buy and prices are starting to run away from them. They need to place money so that they can keep up with their benchmarks. The dips that we saw in the last two months were very brief because Asset Managers are getting more aggressive.

Solid earnings with the prospect of earnings growth in Q3 (year-over-year) will drive this market. Interest rates won’t stand in the way since they have been declining. The Fed is committed to “easy money” and inflation is low. Economic numbers are not robust, but they are improving. I can see these conditions persisting through year-end.

There are a few things that could stand in the way and we need to be watchful. First of all, if economic conditions deteriorate in the US, fears of a double-dip recession will surface. Secondly, any falloff in Chinese economic activity would spark a wave of selling since they are the primary catalyst for this recovery. The chance for an Eastern European central bank failure still looms and fears of a financial crisis could reemerge. While these are all possible, I don’t believe we’ll see them in the next few months since fiscal stimulus spending has globally hit stride.

The greater danger will come next year when taxes increase and businesses postpone hiring. Consumption drives 70% of our economy and it will be slow to recover. Americans have mountains of debt and after a 20 year decline in the personal savings rate; they are finally starting to live within their means. It will take years for most to claw their way out of debt. China relies on exports (30% of GDP) and they run the risk of overproducing if our consumption does not return. I believe that 2010 will be tough, but for the time being I will embrace this rally.

As long as prices don’t run up too quickly, we could see a nice gradual climb higher. The market has come a long way in the last week and I would not be surprised to see a pullback Monday or Tuesday. Selling into strength and waiting for a small pullback makes sense after big rallies.

The economic news next week and the FOMC meeting should be positive for the market. As long as the breakout at SPY105 holds, you can stay long and play the momentum. Energy looks particularly attractive to me since oil has not rallied relative to the market. If activity is truly improving, oil prices will start to move higher. I am selling out of the money puts in this sector.

Yesterday, the market could have easily shed some of its gains, but sellers were not able to generate any momentum. The bid is still strong and the market bounced right back. We are off to a good start today and I expect choppy trading back and forth. For the most part, the expiration fireworks have ended. We could see a small rally into the close on buy imbalances. 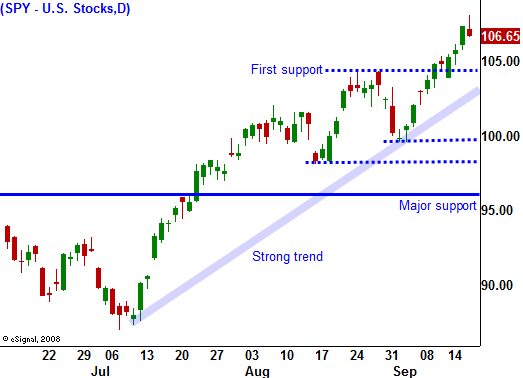