Stay Bullish – Watch For An Intraday Reversal Off of New Highs!

Yesterday, the market surged to a new high for 2009. Overnight strength in global markets led to a positive open. Retail sales came in better than expected and that fueled the rally.

Many traders were expecting the Fed Chairman to suggest the potential for another “asset bubble” when he spoke yesterday afternoon. He stated that he has not any indications that one exists. Consequently, the market continued to show strength into the close.

The Empire Manufacturing Index came in lighter than expected yesterday and that was confirmed by the Industrial Production number this morning. It edged up .1% when analysts had been expecting it to grow by .4%. September’s number (.6%) was smaller than August’s number (1.3%) and we now have a three month downtrend in manufacturing activity. Manufacturing only represents 20% of our economic activity, but it often signals a recovery (or a lack thereof).

Wholesale prices rose moderately and they were lower than analysts expected. Inflation has been benign and I did not expect the PPI to have a material impact on the market.

A number of minor economic releases are due out this week and they should generally be positive. Housing starts and building permits could be interesting since the expectations are very low. Last week, Toll Brothers released much better than expected earnings and improvement in home building could spark enthusiasm. Any shred of positive news (in light volume conditions) during option expiration has the potential to create a short covering rally.

After testing the downside this morning, prices have firmed up. If a rally gains traction, we could see buy programs.

As I mentioned yesterday, I view these “manufactured” rallies with skepticism. The backside can be slippery and you need to sell into strength.

As you can see in today’s chart, each rally has ended with an intraday reversal off of the new high. A day or two later, the market stages a steep decline and that starts the slide. We have not seen that intraday reversal and you can stay bullish until you see it. I feel that we will rally between now and Friday. The S&P 500 should have about another 20 to 30 points of upside before this rally runs its course. The week of Thanksgiving has traditionally been bullish so we might bide a couple of weeks chopping around a new high. I am not looking for a huge rally and prices seem heavy. Stay bullish and watch for that intraday reversal. 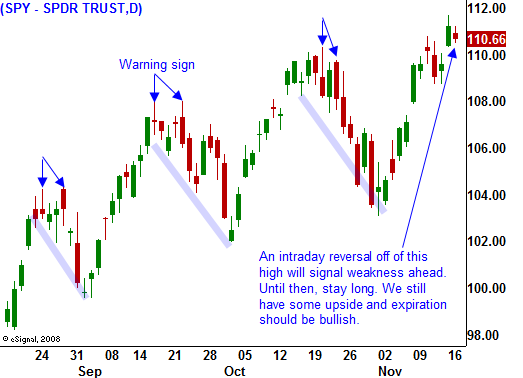