In the last month, the market has wandered aimlessly between SPY 108 and 112. The upward momentum from the eight-month rally has waned. When the market tries to establish a new high for 2009, profit takers sell into the strength. That pattern repeated itself yesterday and the market backed off after the Fed stated that it will maintain an “easy money” policy. That was good news for bulls and the reaction was contrary to what you would expect.

This morning, the S&P 500 is weak. In the last five days, Bank of America and Wells Fargo raised over $30 billion to pay back TARP. While the going was good, Citigroup planned on doing the same. Unfortunately, that window closed quickly and investors were not excited about the secondary offering last night. The company sold 5.4 billion shares at $3.15, much lower than the expected $3.50. The stock has lost 20% of its value in the last week. I was a little surprised at how easily BAC and WFC attracted capital and now we know the saturation point has been reached. This is one of the reasons the market is down substantially this morning.

Politicians are eager to point out how well the bailout has been working and how taxpayers have been rewarded. However, it is the strongest banks that have repaid TARP. Some of them did not even need the aid in the first place. The remaining banks will struggle to repay the loans and their toxic assets will make it difficult for them to raise capital.

Here’s what gets swept under the carpet. Fannie Mae and Freddie Mac have used $112 billion of the $400 billion pledged by the Treasury. Fannie Mae recently warned that it can’t make dividend payments and it needs continual infusions from the government. The two companies are negotiating for more money and according to people close to the talks; officials are discussing the possibility of increasing the Treasury’s commitment up to $400 billion for each company. The Treasury boasts that almost 75% of the $285 billion loaned to banks has been repaid, but it pales in comparison to the $600 billion ear marked for Fannie Mae, Freddie Mac, GMAC and AIG. These four companies are burning through money and sources project that their tab could reach $1 trillion.

Reality is quite different from the picture that is being painted by the White House. Rather than reallocate TARP money that has been repaid, Obama wants to help you caulk your windows (“cash for caulkers”).

Decades of poor lending decisions and poor borrowing decisions will not be solved in a year. I assure you that credit concerns will resurface in 2010. Europe is in dire straits and the PIIGS (Portugal, Italy, Ireland, Greece and Spain) are putting a strain on the EU. Ireland could own more than 50% of its two largest banks. This week, Austria had to nationalize one of its largest banks. It is a major EU member and it said that another major bank is close to failure. Latvia and Bulgaria are perilously close to default.

Individually, each of these credit concerns can be dismissed. However, in aggregate they will have a major ripple effect on the availability of global credit. Banks know that trouble lies ahead and that is why they are fortifying balance sheets now. It also explains why they are so reluctant to lend money.

In addition to credit issues, I have two signs that tell me a recovery is not underway. First of all, the demand for oil has not increased. It is the fabric to every economy and if conditions were improving, we would see oil supplies dwindling. We did see a draw in oil reserves this week, but that is the first good data point in months. The second problem I have relates to transportation. If a recovery were underway, shipping would increase. This morning, FedEx released earnings. Their guidance for Q1 was way below expectations. Railroads and truckers have provided dismal guidance and while they believe the worst is over, they do not project growth until the middle of 2010. If we are in a recovery, where is the traffic?
This week, the economic news has been mixed. Empire Manufacturing fell much more than expected, but industrial production and the Philly Fed were better than expected. LEI were positive this morning, but initial jobless claims rose for the second straight week. The PPI and CPI both showed that inflation was heating up and that is bad for the economy. GDP will be released next week and it came in lower than expected last month. Durable goods orders also disappointed last month and it will be released Christmas Eve. These numbers are likely to have a negative bias and “less bad” economic numbers might not float this boat in 2010.
The trading volumes have been low the last few weeks and they will drop off dramatically next week. Seasonal strength would normally push the market higher. Quadruple witching in December has produced a rally 23 out of the last 25 years and the market has been up seven consecutive years. When powerful patterns like this are disrupted, traders take notice. The selloff today tells me that danger lies ahead. Call open interest in index options was large enough to spark a rally this week and it failed to materialize. Consequently, I don’t believe we will see a “Santa Claus Rally”. Traders are too anxious to take chips off of the table and they will sell into strength.

This is a fantastic shorting opportunity. For now, I am selling out of the money call credit spreads. The selling today will likely be contained as we head into the weekend. Mondays have been very bullish and the last seven in a row have produced a rally. I don’t want to fight seasonality heading into Christmas so I will distance myself from the action by selling out of the money call credit spreads. After Christmas, I will start buying put options. The VIX is very low and options are cheap. As technical support levels fail, I will get more aggressive in will start buying puts. 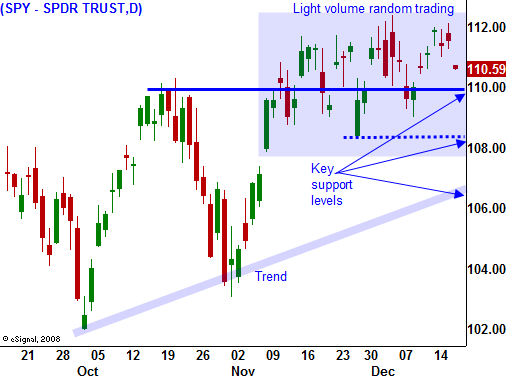