Sell the Rallies – Technical Support Has Been Breached – Decline Will Intensify!

Strong trends die hard. Yesterday, the market declined early in the day as European credit concerns escalated. By mid-morning the bleeding had stopped and prices were on the rebound. In today’s chart you can see how the market has been careful not to get ahead of itself. Large intraday declines have attracted buyers and stocks have been able to close well above their lows.

This type of price action is very typical during transitional periods. The strong uptrend still has bulls in a “buy the dip” mindset. Many analysts feel that Europe will not drag down global economies even if a credit crisis surfaces. They argue that it only accounts for 25% of global GDP and the other three quarters of the world is growing. They also refuse to believe that a credit crisis is imminent. They don’t have any hard evidence and they will continue to buy stocks. With excellent profits and low interest rates, stocks are attractively valued.

This market will be hard to turn, but it will turn. Massive debt levels have painted socialist countries into a corner. Many of them have defaulted on their loans in the past and deficit spending is nothing new to them. Spain has defaulted 13 times in the last 200 years. The EU is fighting for its survival. Each nation has its own political system and philosophy. In the absence of a centralized government, it will be tough to keep all of the members unified.

The US had a hard time agreeing on the proper course of action last year. We had a centralized government and a dominant political party that was able to get legislation passed. Even then, we barely survived the crisis. The EU is very fragmented and its unity is being tested by a very small country.

Of the $1 trillion “slush fund” drafted by the EU a week ago, the IMF agreed to put up 25%. Today, US legislators put a halt to that. We are the largest contributor to the IMF and we will not contribute money to nations that we feel will default. This is the best news I’ve heard in weeks. The US will have veto power before any IMF funds are sent.

If the IMF pulls its funding in any situation, Germany will follow. They are the strongest EU member and they do not want to go down in flames trying to save a lost cause.

Throughout this entire process, Greece has been completely unreasonable. Even the smallest austerity measures have met stiff resistance and rioting has broken out. Yesterday, the Prime Minister suggested that he might bite the hand that has been feeding him. He faults banks for lending Greece money and he may file lawsuits against them. This is the craziest thing I’ve ever heard and the thought of lending Greece any money makes me sick.

More than half of China’s economy depends on exports. More than half of the exports go to Europe. A European credit crisis will most definitely affect China (the one country that is supposed to pull the entire world out of a recession). We don’t need to see a credit crisis, just economic contraction. If austerity programs are implemented, economic activity will fall in Europe.

China has been growing at an alarming rate. Their own government fears a speculative bubble and they are trying to pull back the reins. I suspect that inventories have been built up in anticipation of a full-blown global recovery. Any economic slowdown will leave them with a glut of inventory and factories will be shut down.

The market can deal with the recession. Corporations have cut the fat and they are running lean and mean. A credit crisis is a completely different matter. When the banking system locks up, businesses can’t meet short-term obligations and the entire economy crashes. This is exactly what we saw last year.

Stocks that are” attractively valued” are dumped as investors try to get “liquid”. In fact, all assets (even gold) are sold.

Traders do not believe that the EU will be able to survive this crisis. They sold the Eurodollar even after the $1 trillion package was revealed. The debt levels across Europe (and the US for that matter) are so high that the financial system has been pushed to its limits. The EU’s statements no longer carry any weight and they are truly out of bullets. Now it is just a matter of time.

Any rally will represent a selling opportunity. The decline will be choppy at first and the bulls need to be tamed. That won’t take long. After they lose money buying the first few dips, they will pull their bids. Over a period of weeks (a month or two at the longest), fear will increase and the selling pressure will mount. When that happens, buy longer term put options (even far out of the money puts) and be prepared to hold on to them. Major support levels will fall easily.
This has the potential to get ugly. The US has benefited from a flight to safety. Our financial condition is not much better than Europe’s and when that comes to light, intense selling will set in here. 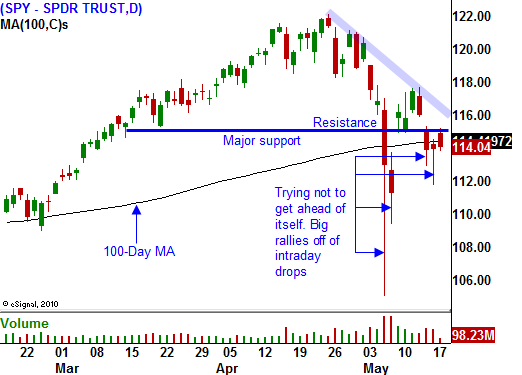