Look Out Below! Bulls Have Pulled Their Bids and Bears Are In Control.

What a volatile week! Monday, the market sold off dramatically and by mid-day we had a 20-point reversal in the S&P 500. Stocks almost finished in positive territory and that move set us up for a higher open yesterday. Stocks rallied and the S&P 500 was up 11 points in early trading. By the end of the day, prices reversed and a full-blown selloff was underway.

The price action this morning has been very choppy and we have traded in positive and negative territory. Random price movements are swinging the market back and forth.

As I have been mentioning, the EU will fight for its existence to the bitter end. Bold actions will be taken and the market will have knee-jerk reactions. Yesterday, Germany banned short sales on Euro denominated bonds and naked shorts for shares of 10 of the largest banks. They want to fend off speculators during tenuous times.

Germany is the largest and most powerful EU member. Chancellor Merkel wants to draft a policy to deal with insolvent EU members. Those who recklessly run up debt will lose their voting privileges and they will be tossed out of the union. Countries will not want to suffer the consequences of being dropped by the EU and they will follow the rules. Unfortunately, deficit guidelines needed to be addressed when the EU was formed. The PIIGS have already in a debt spiral and these rules are pointless.

The credit crisis in Europe is all that matters right now. If it spreads, global banking will lock up as it did last year. Financial institutions will try to avoid counterparty risk and they will stop doing business with each other.

Austerity programs in Europe will constrict economic activity and that will impact the global recovery. China gets most of its GDP from exports (25% go to Europe). If China slows, the rest of the world will follow.

Europe accounts for 25% of the world’s GDP. Under normal circumstances, you could argue that the three quarters of the world that is growing could pull Europe out of this recession. These are not normal times. Most of the world’s economic powers are deeply in debt and their economies are only growing because of government spending. Once that stimulus winds down, organic growth will not take over. In this fragile recovery, Europe will drag the rest of the world down with it.

This morning, the CPI came in “light” and prices fell .1%. Lower energy prices brought the index down. New home sales and mortgage applications fell dramatically. This was expected since the government’s first time home buyer tax incentive program has ended. Earnings and economic releases are having little impact on the market.

All eyes are on Europe and fear is setting in. Investors remember the horror from last year and they don’t want to relive it. Stocks have rebounded 65% from their lows a year ago and people are taking their chips off the table.

The market has broken critical support at SPY 115. We staged a tiny little bounce last week and immediately fell back below support. The price action is very bearish and the selling pressure is picking up as I write this report. If option traders sense downward momentum, option expiration could fuel a big decline.

Look for weak price action heading into the weekend. Friday afternoon, we will see some short covering. Traders don’t want to risk a major news event over the weekend and they will take some profits on their short positions. If major developments don’t support a rally over the weekend, the selling will start up again next week.

There are a couple of European bond auctions this week. If they go poorly, the market will quickly decline. The bears are totally in control now. Any news from the EU is dismissed and the selling pressure has intensified. Stay short. 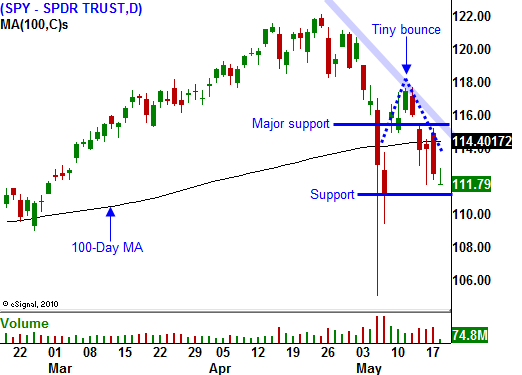