China’s PMI Was Strong. The One Potential Spoiler Is Out of the Way!

Early weakness and late strength characterize the trading pattern we’ve seen during the last week. Buyers are waiting for a dip and they are getting anxious. After an 8% rally in a matter of weeks, you would expect a normal correction. Asset Managers don’t want to chase stocks when they are at the top of the range, but they don’t want to miss a year-end rally either. Each little pullback attracts buyers.

Earnings season is approaching and the market has rallied the last four quarters heading into it. November elections are also expected to favor Republicans and that is bullish. The Fed stands ready with another round of quantitative easing if conditions weaken. All of these factors are supporting the market and we are bumping up against major resistance.

We need a catalyst to push us through. I have been mentioning that China’s PMI could be a spoiler. I thought the number would be released tomorrow, but it came out today. It rose to 52.9 and that is bullish. The world is counting on China to pull us out a recession and even with monetary tightening, their economy continues to grow.

With this number out of the way, I feel confident that we will be able to get through the economic numbers. Tomorrow, initial claims will be released. They have been coming in around 460,000 and the market seems content with the number. GDP will also be released tomorrow and analysts expect it to come in at 1.6%. That is flat and is not likely to impact the market. Chicago PMI has been weak and the market has been able to look past the number.

Friday, consumer sentiment, ISM manufacturing and construction spending will be released. Consumer sentiment has been weak and that is factored into the market. Earlier this week, consumer confidence was dismal and it did not spark a selloff. Construction spending can only get better since it is horribly low. Any surprise would be to the upside. ISM manufacturing should weigh on the market. Last month it jumped more than expected and that was contrary to all other manufacturing releases. I am expecting it to be revised downward, but I don’t think this one-piece of economic data is a spoiler.

Next week, ISM services, ADP Employment, initial claims, wholesale inventories and the Unemployment Report will be released. ISM services dropped dramatically last month and this could generate a light round of selling when it is released Tuesday. Almost 80% of our economic activity comes from the service sector and this is an important number. Initial jobless claims have improved slightly in recent weeks and that bodes well for the Unemployment Report. Analysts are expecting 15,000 job losses and even if we lose 100,000 jobs, the market should be able to shoulder the news.

Interest rates are at historic lows and money will rotate out of fixed income and into equities. Dividend yields on many stocks are higher than the yield on 10-year US Treasuries. Investors are able to generate income and they have upside potential if the stock rallies. Large corporations with lots of cash (i.e. Microsoft) are issuing debt and they are using the proceeds to buy back shares. This is bullish for the market and stocks are attractively valued.

I believe we will see a breakout and a nice rally during the next few weeks. The market is likely to test the highs of the year. I will be taking profits as that momentum wanes. There are still major problems that loom.

Credit concerns in Ireland and Portugal are heating up. Like Greece, they will also need financial assistance from the ECB/IMF. The list of “problem countries” will grow and it is just a matter of time until Germany decides it does not want to bail everyone else out. Union strikes are breaking out across Europe as austerity programs are implemented. These cost cuts have not even scratched the surface of the structural problems that exist.

We have the same issues in the US. Taxes will have to increase and expenses will have to be cut to balance the budget. State and local governments are in bad shape and they are sinking further and further into debt.

Massive debt levels have been growing for decades and this problem will continue to fester until it reaches a breaking point. That could come in a matter of months or it could take a year or two to manifest. When it does, credit markets will lock up and the next recession will be even deeper than the one we just experienced. Instead of entities going bankrupt, nations will be in default. Currency markets will be in a flux and commerce will shut down until the dust settles.

For now, let’s focus on the bullish side of the equation. China’s PMI is out of the way and I believe we will be able to get through next week’s numbers in decent shape. The market will assault SPY 115 and the breakout will attract investors.

If you have been taking profits on long positions, hold on to what you have. Any decline will be short and sweet. Each day, the sell-offs fail because buyers want in. When we breakout, add to positions. 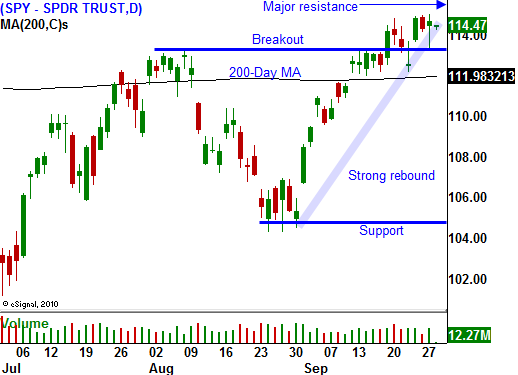