Last week, the market was able to bounce off of support at SPY 130 after Standard & Poor’s lowered its outlook for the US. This downgrade was already factored into the market and stocks quickly shifted their focus to earnings. Intel and IBM reported better-than-expected profits and the guidance was excellent. Tech stocks lead the rally and the market currently sits just below its highs of the year.

This will be the busiest week of releases for Q1 earnings. Results will be posted from every sector and the price action should be positive. Healthcare and tech have been strong. Financials are treading water. If regional banks and insurance companies gain traction, this sector could also fuel a breakout. As long as the market focuses on earnings, the market action will be positive.

Unrest around the world could become an issue in May. The fighting in Libya wages on and this war could last a long time. Yemen’s president stepped down over the weekend and he handed his power over to his deputy. Syria reported that 100 people were killed by security forces during protests. Nigeria postponed elections and violence is erupting there. The Taliban staged a prison break in Afghanistan and 476 political prisoners escaped. Fighting is breaking out along the borders of Thailand and Cambodia. Individually, these conflicts won’t move the market. However, they might collectively affect investor confidence.

European debt markets can breathe a little easier this morning. Finland’s Finance Minister said that it will participate in Portugal’s rescue efforts. Greece is still in crisis mode and most analysts fear that it will have to restructure. EU officials will hold a special summit (May 9th) in Athens to discuss the situation. EU bailout policies have not been determined and there will be increasing pressure to reach an agreement in coming months. That will lead to heated debates between stronger and weaker members.

The banter between Republicans and Democrats will also escalate. Both sides are drifting farther apart and they need to raise the debt ceiling in the next three weeks. This will probably happen at the 12th hour, and the suspense will weigh on the market. If the US temporarily defaults on its bonds (the debt ceiling is not raised in time) the market will fall sharply.

During this week’s FOMC meeting, the rhetoric should remain the same. However, a special meeting will be held to discuss how monetary tightening will be handled in the future. The Fed will complete QE2, but it will not raise rates. The economic recovery is still fragile and the Fed does not feel inflation is a threat.

The economic releases this week (durable goods, GDP and initial claims) should not have a major impact on the market. Employment is the key to a sustained economic recovery and those numbers will be released next week. Initial claims have been creeping higher the last few weeks and I will be watching Thursday’s release closely.

I still believe that the market will challenge the highs of the year. Stocks should be able to break out this week. I am long calls and those positions have nice profits. My stops are in place in case the market reverses. On a breakout, I will set targets and I will start to scale out of positions later in the week. The further we get into May, the greater the chance for a pullback.

Ride this final push higher, but be ready to get out. In May, I plan to sell out of the money call spreads and I will use the proceeds to buy out of the money puts in June. The storm clouds should start rolling in by then.

Look for choppy price action today with a slightly bearish tone. The market should rally Tuesday and Wednesday on earnings news. 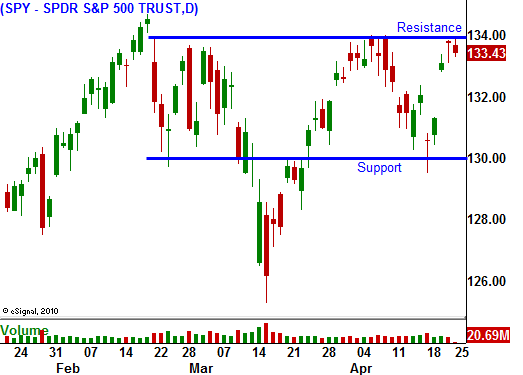