This morning, stocks are testing the downside after a big run last week. The SPY bumped up against resistance at 123 on Friday and the head winds will start blowing.

Over the weekend, analysts are less optimistic about Europe’s “grand bargain”. The comprehensive plan will be tough to draft with so many opposing opinions. Europe has dragged its feet during the last 18 months and I sense disappointment on October 23rd when the details will be released.

Even if a master plan is crafted, financing still has to be secured. Many analysts feel that Europe needs more than $1 trillion and that is more than it can get from EU members. Officials have been asking for support from emerging markets and China. China said that it will only participate if massive budget cuts are made.

Stocks were priced for a major economic decline in September and the releases have been decent. Global activity is not falling off a cliff, but it is not growing either. Better than expected economic numbers and the potential for a comprehensive credit crisis plan sparked a market rally from deeply oversold territory last week. Earnings season and short covering provided additional thrust.

The momentum is strong but it will start to weaken as the market bumps up against resistance. IBM, Intel, EMC, VM Ware, and Apple will all release earnings in the next two days. I am expecting positive reactions. If the market fails to rally, this earnings move could be over. These are some of the strongest stocks and they need to “move the needle”.

Today, profit-taking has set in. Bears will probe for support and we will be able to gauge the appetite for equities. Asset Managers will try to scoop stocks ahead of the year-end rally. If they feel skittish, the bid will be relatively light.

It is tempting to short the market at this level, but I would not suggest it. Let this strong round of earnings pass and evaluate the price action. If you are still hanging on to long positions, get out tomorrow and Wednesday. This is a good time to be on the sidelines.

Tonight, China will release its GDP. Chinese steel prices have fallen to a 10 month low. Jiangsu Shagang Group said it may delay iron ore shipments if it needs to cut steel output. This GDP release could weigh on the market and Asian stocks have underperformed. Cummins said that Europe is already in a recession.

I don’t believe stocks will tank ahead of major earnings releases. Euro credit crisis concerns have been pacified for another week and that should pave the way for stocks. Economic releases are light this week and they will not stand in the way either.

Stocks should move higher early this week and then they will stall. If the reaction to good earnings is “wimpy”, it means the rally will be brief and the market will settle back into the middle of the trading range. If the price action is strong, we might test resistance at SPY 125. I don’t believe we will get through that.

To recap, look for a rebound today and strength should last through Wednesday. Take this opportunity to get out of longs. Don’t prematurely short this market. Year end rallies can be very strong and one good news item out of China or Europe can spark another round of buying.

The easy money has been made, keep your powder dry.
.
. 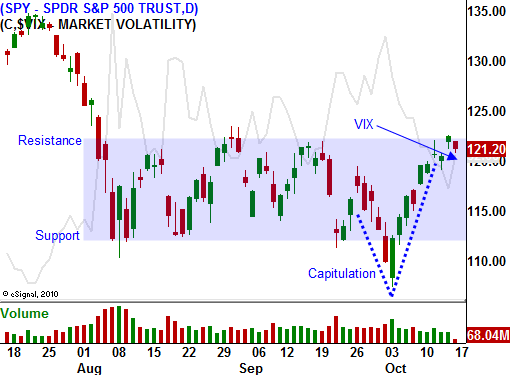